It’s Friday, which means that it’s time for another blog post from the Marketing for Romance Writers blog challenge. This week’s prompt is My Earliest Memory.

I had a great childhood for the most part. My parents created a fun world for us to live in, took us on vacations every year and created memories for us like champions. As a result, I have a gazillion memories I could share…

But trying to narrow all of those great memories down to the earliest is a bit of a challenge. Some stories might not be actual memories. I might just have heard my parents talking about an incident so often growing up that I think I remember it, when in reality, I don’t. For instance, I think I remember telling my mom that I always wanted to be three, but maybe I just think I remember it because she told me so often that I said it.

There are two things I do remember, however, and both happened when I was pretty young–3 or maybe 4 at the most, I’m guessing. I have no idea which came first, so I guess you’ll just have to hear about both of them. 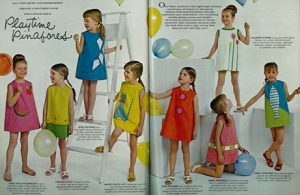 One thing I remember quite clearly is the day I got “lost” while my mom was shopping at J.C. Penney in Billings, Montana. I remember feeling bored while my mom looked at fabric. Mom sewed all of our clothes when I was younger, not only for us kids, but for herself, as well. I know browsing fabric and patterns was necessary, but it’s a real snooze-fest for a three-year-old.

I remember that the fabric department was on the mezzanine level, and that a ramp led

from the mezzanine to the first floor. I remember walking down that ramp to find something more interesting to do. I don’t remember how long it took me to get to the front door of the store and outside onto the sidewalk, but I do remember deciding to cross the street and being stopped by some man. I remember that he made me mad because he stopped me, and that he carried me to the corner where a policeman on a motorcycle was sitting. This was back before we were all so paranoid about child safety, so to the best of my recollection, the policeman put me on the motorcycle in front of him and took me to the police station. That part’s a bit of a blur.

What I remember clearly after that is sitting on some kind of table or counter fairly high off the floor, eating a lollipop or ice cream, when my mother burst into the room. I remember her face was red and puffy (obviously, she’d been crying) and she looked utterly frantic (which I completely understand now.) I remember at the time, however, wondering what was wrong with her. The look on her face made no sense at all to me because I was having such a great time.

The other childhood memory that ties with this one for earliest memory happened at my Aunt Pauline’s house when I was very small. I know I was very young because it took place in Pauline’s old house–the one in Porterville, not the nice, new one in Morgan. She and my uncle Darrell were still married at the time, and they moved to Morgan was I was still fairly young–younger than 9 because they were already living in Morgan when my grandmother Carter died the year I turned 9.

But I digress. I think I was much younger than 9 when this happened.

We were having dinner, a bunch of us. It may have just been Pauline and Darrell and their kids, Mom, Dad, and us kids, along with our grandparents. I don’t think Pauline’s kitchen/dining area was big enough for a huge group. Aunt Dena might also have been there because I think this was before she got married. (All this to help me prove to myself that I was really young.)

Anyhoo, I was sitting next to Grandmother Carter, whom I clearly remember was talking much more than she was eating. Apparently, I didn’t get full on my plate, or maybe I just really liked what we had for dinner, because I remember reaching over to her plate a few time and helping myself to what was there. The adults at the table must have been having a great time (not surprising if you knew my family) because nobody noticed me scavenging off Grandmother’s plate until sometime much later when she finally went to take a bite of dinner and discovered that her food was gone! I guess I’d cleared her plate while she was talking. I’m not sure what happened after that, except I think I remember a lot of laughter. I know for a fact I didn’t get into any kind of trouble. I’d have remembered that.

This is a blog hop, so make sure to check out the earliest memories of the other participting authors. Their links are below.

6 thoughts on “A Trip Down Memory Lane – #MFRWauthor Week 2”